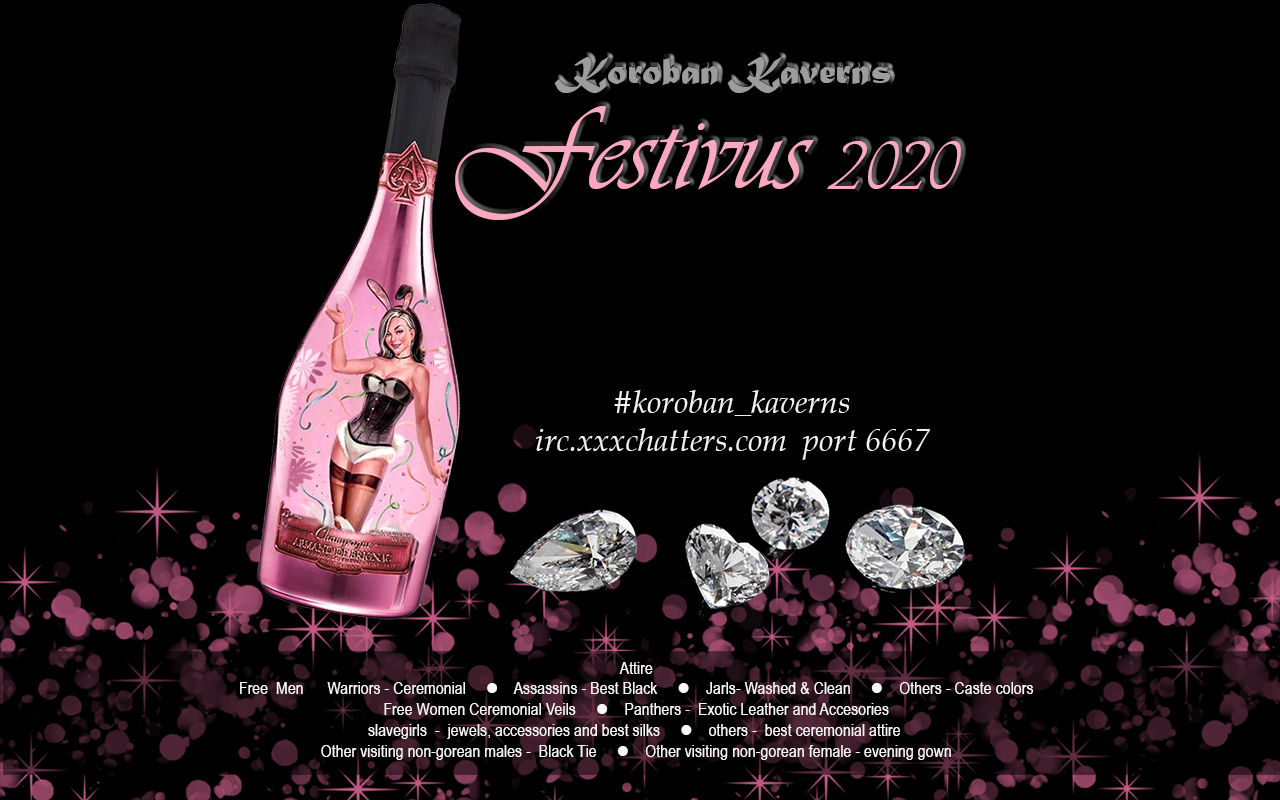 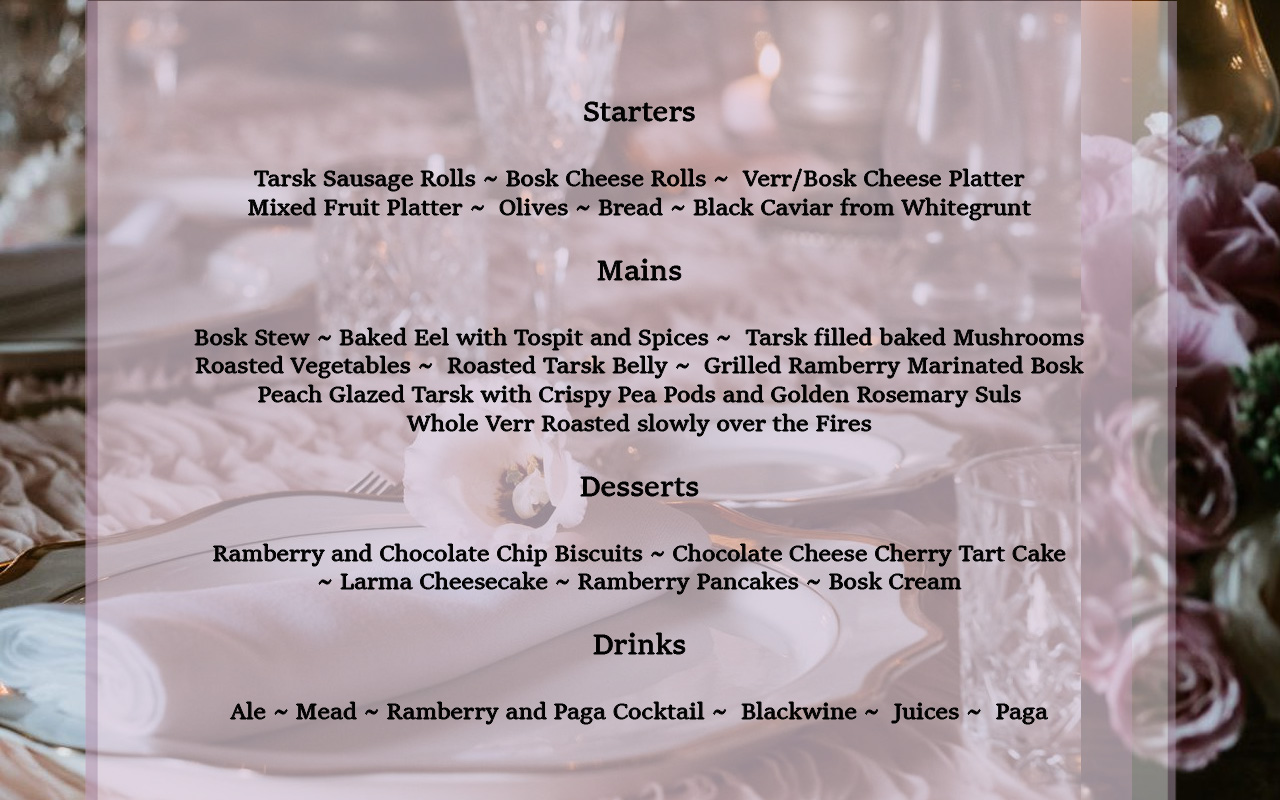 Please leave your coins at Home. Event charged to OdinsRune, Ravenheart and Rhage

ShadoeFox walks to the center of the room, not quite the sands as he has two left feet. He salutes the Jarl, the Home, and the crowd with his wine goblet, smiling.

Demoness approached me weeks ago, asking me to tell a story for her Festivus party, and I was truly honored. I swore I would put my best foot forward and write something funny, insightful, and clever. I then, um… forgot.

ShadoeFox turns to glare at the musicians, as they play a short, mocking lyric from their instruments, dark eyes narrowed for a moment before returning to smiling to the Home at large.

But she reminded me soon enough, that I still had time to work on my tale! So, of course I bravely lifted my finest quill… and drew a total and complete blank. ShadoeFox gives the Musicians a rude gesture as several of them laugh.

Fortunately, inspiration came to me! And much as one should never thank a slave for serving, that is their lot, I thank shiva for giving me a little help, if by chance. I admit, mostly by putting a thought into my head.

ShadoeFox gestures and the musicians begin to play a background tune, a whimsical melody of an understated tone, not so loud as to drown out a speakers voice, but to add to the feeling of the tale.

This story is of a dream and as such I beg pardon if things seem out of character for those mentioned. For Rhage would never trim his tunic in pink but this was in my dream! I assumed adeen had something to do with it.

So, the kajira decide on their own, due to the free being busy doing I know not what, to go raid. This occurred in old Gor occasionally, slaves of one home going to a quiet neighbor to ‘attack’, stealing liquor and food.

ShadoeFox jerks in shock as the musicians play a heroic, brassy, motif, spinning around and shaking a fist. The musicians calm and return to the original music and the Fox smooths blue robes, muttering about ‘finding good help’.

As I was saying, they decide to raid. Not wanting to walk, they do what seemed the logical thing and stole RavenHearts’s wagon, lara driving so that it wasn’t so much stealing as property wandering off. shiva, who had the idea, riding ‘shotgun’.

For some reason adeen insisted on riding on top of the wagon, and I’m not sure why her usual attire had turned to tight leather, black and oddly shiny, while melly for some reason was beside her and giggling the entire way.

talia seemed to bounce between not wanting to go, and planning to steal all the things her Mistress loved and chemy… I’m not actually sure what chemy was saying as I don’t speak Dutch. But she seemed happy?

ShadoeFox shrugs weakly, and once more the musicians play a mocking tune. Growling, the scribe tosses the goblet at them, though the throw only hit the triangle musician. None seem to notice, or don’t seem to care.

AS I was saying, the girls drove to a tavern, no idea whose, and the lovely iris burst from the wagon door swinging what I hesitate to call a hammer, but I insist could not have been a giant vulo leg as that makes no sense, smashing the door.

ShadoeFox the music becomes a bit chaotic, but more heroic, as though some musicians wish to keep the whimsy while others wanted to celebrate the poultry inspired door destruction.

The girls flood in and kajira of the other home rush out in defense. Before long the girls were mostly or completely naked, but for melly and nara who were covered head to toe in ramberry jam! They didn’t care only one was a red silk, it seems.

Our girls, outnumbered, were not doing well. iris, her vulo hammer lost, bound, and caged, while chemy was somehow chained to their whipping post. It looked as though things might end badly!

ShadoeFox nods sadly as the music swings to a sadder note, one of battles lost, of defeat oncoming, but then a trumpet blare.

But it was not to be a loss that day, as through the wall, with a cry of “Oh Yeah” our brave leader, the Jarl OdinsRune came, swinging a bota of paga over his head, waylaying one of the enemies laughing, mocking men with the skin in a burst of potent and unpleasant smelling booze.

Rhage dropped from the ceiling crying out “Groovy Baby” as he began swinging, laying out a Man here, a Free Woman who tripped over her robes into his fist there… not sure what their pet did to deserve a kick to its groin, though.

ShadoeFox spins as another ‘wa wa’ played from the musicians, a long feather quill thrown, this time with lightning accuracy. It struck the trombone musician… why there was a trombone on Gor unclear, the man falling with a Wilhelm scream.

Then in charged the other men of the Home, Mahdi also for some reason speaking in strange tongues jumping on a table and ripping down a chandelier, while a certain Radio Producer of our familiarity was…

ShadoeFox pauses, the music stopping suddenly as well. The scribe looks back at the musicians, who shrug just as confused seeming as he.

Well, I’m not sure what he was doing. It involved strange black disks, an odd table, and the sound of tormented beasts surrounded by music, something called techno. Fornication was a frequent lyrical theme.

ShadoeFox jumps with a yelp as the drummers start playing an intense dance beat, the strings section throwing out something fast and slightly discordant, but he shakes it off, still caught up in the tale.

The girls, of course, were thankful for the Men coming to rescue them! freya all but draping over our Jarl like a mink, lara riding the enemy first girl like a tarn as RavenHeart smash a tankard over some bastard’s head.

An excited seeming adeen wove through Rhage’s legs like a small larl kitten… I’m not quite sure how since he was hip thrusting at the other home’s leader most disrespectfully. And nara and melly had somehow found some toast.

Demoness would likely have been getting love from talia… but our Lady was busy. I’m sure I don’t have to explain what a Panther surrounded by unconscious Men may do when not stopped, involving other panthers and likely knives in some manner.

Only then, FINALLY, did I appear, yelling something about the guards coming and we needed to leave quickly. Now… here’s where the dream gets a little weird. For some damn reason I wasn’t wearing any pants.

ShadoeFox shrugs as the mocking tone comes forth from the musicians once more, sheepishly lifting the hem of my robes to show that I was right then.

But who can understand the logic of a dream?

Masters, Jarls, Mistresses and ladies! in the year 1955 this was the Billboard pop charts number 6 song! for the Holiday
not even I grew up with this song, but perhaps our Resident Ancient One might have! Our one and only!!!!!!!! Master Rhage!
all claps for Master Rhage and if we can take a short minute to listen to ! Barry Gordon!
https://youtu.be/jrnuP-uZXJk
1955 #6 Billboard pop chart, million seller sung by 6 year old vocalist Barry Gordon
Nuttin' for Christmas by Sid Tepper and Roy C. Bennet

lara{KK} stoked RH's bat on Wagon bed...
RavenHeart oofs from the load atop his lap and grins as he stares at the slut
elena{MM} snitched oh her!

elena{MM} hid enya on her bed!...
elena{MM} tries to drag enya with her to the kennels looking pleadingly at her Owner
nara{KK} snitched on her!


nara{KK} left some on the pole...moving heated body... leave trails of wetness...
chemy{KK} made Master eat hum hum hum... +chemy{KK} whispers...leaking on my silk
OdinsRune made some C with Mahdi's bot...
<~Odinsrune> I would never admit to melting down a bot and building collars out of it
Ravenheart snitched on Him!

Ravenheart spilled on the bed...
<&RavenHeart> hmmm My dreams are abit more vulgar than dancing on tabletops (Was He wearing a pink tu-tu?)
na`lira{KK} painted a souvenir of it and hanged it on Kavern's wall
shiva{KK} snitched on Him and sis!

Demoness stored all the paga botas
Amata sharpened all the pencils!
Tory tied and left His girl
Marqalex untied the girl and went for a walk

Blueyedevil kept all 52 weekly sleeping furs!
Rhage got 2 minus 1 and more...
ShadoeFox peeked up Khaos skirt
Khaos shot ShadoeFox like the sheriff

We're getting nuttin for Christmas!
Cause we're ain't nothing but bad